In July 2018, the RateMyApprenticeship Awards recognised Outstanding Apprentices across the UK who are making a difference.

Find out what it takes to be an apprentice, and why more young people should consider it an option instead of taking the traditional university path...

Hello James, can you tell us a little bit about yourself?

I completed my GCSEs and A-Levels at The Ecclesbourne School just outside of Derby. Now, I work as an apprentice for Rolls-Royce. I’m also a season ticket holder at Derby County – which has provided some ups and downs in the past few years!

Why did you choose to do an apprenticeship?

Once I’d decided to join Sixth Form after completing my GCSEs, I started to consider ‘post-18’ options. Something which became clear was the attraction of joining a business and learning on-the-job. After so many years in education, I’d found that I learn best when I can apply theory and see the results in a real environment.

Another reason I chose to do an apprenticeship was the understanding that the employer sponsors additional training relevant to working in their function and industry.

What does your role involve?

The nature of the Rolls-Royce Project Management Higher Apprenticeship means that I move roles in the business every six months. This gives me the opportunity to see a range of areas within the business, which proves really useful. I'm able to gain experience in working on projects of varying scale and complexity.

On a day-to-day basis I work across various programmes, mainly in Civil Aerospace. A lot of my job at the moment is around stakeholder engagement, risk management, scheduling, quality management and data management.

Who supported you when applying for your apprenticeship?

Most of the support I received came from family members. With three of my cousins having previously been through apprenticeships at Rolls-Royce, to hear how much they enjoyed and learned was another great motivation.

Once I understood more about apprenticeships and decided that the Project Management scheme was my first choice going forward, I had a lot of motivation to make sure all preparations were as good as possible to give me the best chance of succeeding.

I also used the apprenticeship reviews on RateMyApprenticeship to find out what it was really like to work at the companies I applied to.

Do you have any tips for students considering an apprenticeship?

When I speak to students who are looking to get on to an apprenticeship scheme, I think the most crucial point to emphasise is the importance of extracurricular activities...

While a minimum requirement of grades is the first hurdle in most applications, when it comes to an interview and discussions around how you can benefit the business, a lot of conversation focuses on ‘What have you done to go above and beyond?’

Being able to recall on examples such as being part of a team or club, helping with lesson support at school or volunteering in your spare time are the factors which can help separate you from the other applicants.

The most important decision is determining which scheme best suits the student. Given the length of most schemes, which can range from 2-4 years, it’s so important to ensure that the subject is something that interests the individual.

Once the discipline is decided, consider what each individual business does, understand as much as you can about how they work and try to find which seems to best suit. 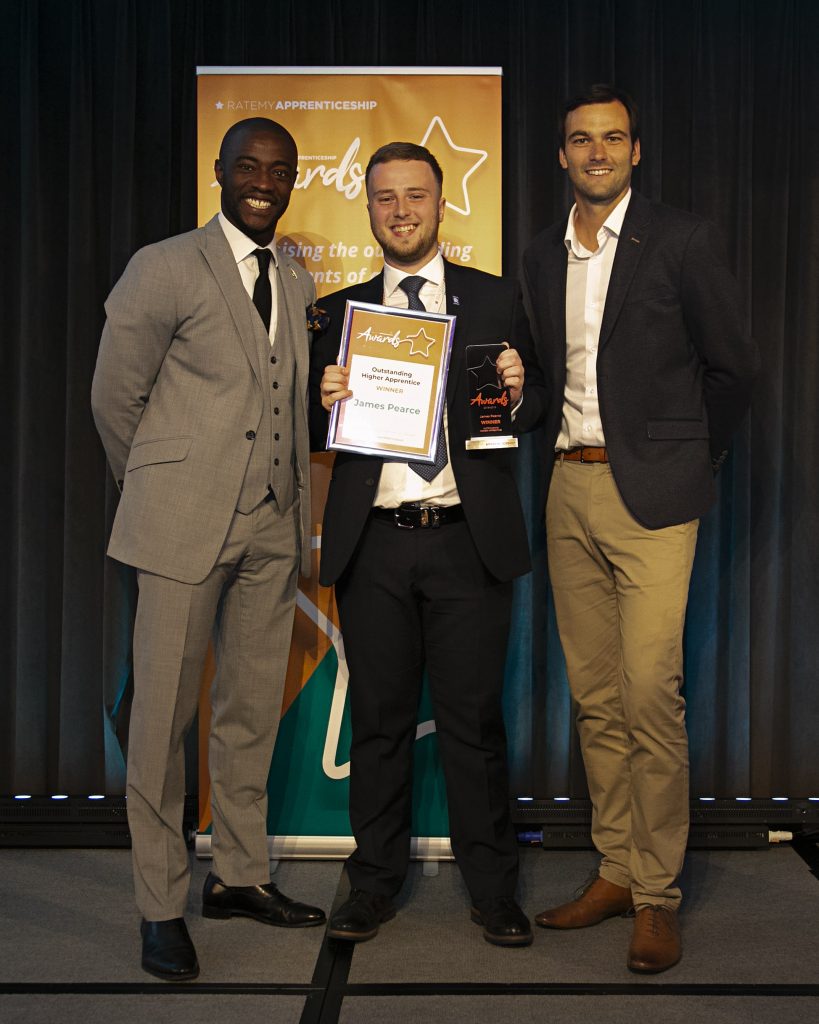 How does it feel to be voted a RateMyApprenticeship Outstanding Apprentice for 2018?

Being nominated for the Outstanding Apprentice award was a great achievement, especially being recognised in a business with so many other talented young people.

Finding out I’d been shortlisted and then to go on win the award was a great feeling. It’s a credit to the support and development I’ve received since joining the Rolls-Royce.

It’s been a great confidence boost, especially at such an early stage in my career and real motivation to continue improving and to help others be at their best.

Where do you see yourself in 5 years’ time?

In 5 years’ time I think I’ll be at Rolls-Royce, in some form of project role. One of the exciting things about Project Management is that you never quite know the nature of the projects which will be live at a given point in the future.

Just for fun: what did you want to be when you were younger?

Between the age of about 4 and 17 I didn’t really know at all what I wanted to be. I just knew that I wanted to do something that I found interesting and enjoyable. I’ve always followed sport so I probably could see myself being a footballer, but the realisation that this wasn’t going to happen came quite early on!

If you want be like James and start a career through an apprenticeship rather than going to university, RateMyApprenticeship has hundreds of jobs you can apply to...

Apprenticeship application forms: can you do without this advice?
The Most Common Apprenticeship Interview Questions (and how to answer them)
RateMyApprenticeship.co.uk and Mazar’s exclusive webinar

The Next Step Explorer
Where are school leaver opportunities based across the country?
Revision Timetable: Download Your Free Template